Anger is intoxicating, and we are all mean drunks.

I knew what it was I was supposed to do.  I could picture myself standing up from the coffee shop, walking one foot after another down the hot Mankato sidewalk, through the parking lot, opening the door to find two panting dogs and a sleeping Someone.  I would go to him– he who has been sick and who I have been fighting with and who is as cranky and distraught by the hot July heat as I am– and I would brush back his hair from his forehead and I would say,

And then I started to second guess it.  It never worked out like that.  Something would happen– it wouldn’t be perfect.  The heat would get to me three steps onto the blacktop.  Or he would already be awake.  Or I would get inside and my chest would constrict and my jaw would clench and when I went to walk to him, I would be paralyzed, the circuit board of my brain lighting up with the same anger that had me wishing I wasn’t angry anymore.  If it worked out, I had to let it all go.  The strain of getting the apology through my teeth is just. too. hard.

And that’s the thing about anger.  When you’re in it, you know that sobering up from it will feel better than the slurring, drunken state you’re in.  But it is irresistible to not pour another glass when the bottomless bottle is sitting. right. there.

It’s been over three weeks since our Best Friend Fight started, and we have spiraled in and out of hazy barroom punches.  My Someone and I have taken to cleaning up our act.  We’ve been sobering for days, the withdrawal from the anger shaking our bodies as occasional memories drift through our minds unexpectedly from our blackouts.  The hangover feels endless, and the high pitched buzz at the top of our brains has us still reeling.

We still aren’t sure.  What we do know is that we have an email in our inbox from our friend telling us that he no longer wants to be friends.  That we are breaking up.  That he wants to be angry for a while longer.

We are joining support groups.  It’s difficult to become sober around your drinking friends, and so we hope with some time and space that he will show up, too, in the middle of the bundle of hurt, but finally not venturing to take another sip.  But we are still taking unfortunate protective measures.  Getting ourselves and our things out of the way of a raging angerholic.  If he wakes up from this, we want him to find, not a trail of destruction, but a tidy note that says, “Meet us here.  10AM.”

But even if he never shows, we will continue to detox, door unlocked, passively waiting.

I have lately pictured the I’m Sorry part of living as the part that makes us human again.  It’s mostly like the scene at the end of Peter Pan, when Tinkerbell is in a heap and the audience has to clap their hands to bring her back to life again.  But in this I’m Sorry scenario, it is me in the heap on stage, and the ones I’ve hurt and the ones who could continue to be hurt are waiting, and while they wait, they are whispering–

And as the whispers turn into waves and wash over me, my head lifts– me, half human and half monster– and I look out and say it–

And like that, my horns retract and my teeth unsharpen and I am human– fully human– again.

I am often on that stage.  But I am finding it is also no treat to be in the audience, because as you are whispering it to the one caught as half monster there is a fear that takes over.  What if they want to be a monster?  What if they don’t wake up?

What if they never become human again?

I braved the hot sidewalk.  I stepped into the camper.  The dogs were panting.  My Someone was sleeping.  I walked to the side of the bed and sat down.  He rolled over.  I pushed his hair off of his forehead.

And in the reflection of his eyes, I saw my horns retract and my big paws un-fur and shrink back to my hands.  I was human again.  And that tall bottle of anger was shattered.

What a goddamn beautiful mess.

“I just learned on a TED Talk that you can conserve paper towels by folding them in half first before drying your hands on them.  It actually works. Here, try it,” she said, handing me a folded paper towel.

I guess I had a choice in the matter.  But from what I’ve found in the past, these restroom interactions generally go quicker with smiling and agreement.  Any sure-is-cold-out or this-soap-dispenser-is-so-strange sink encounters are just a quick byway to the door to omit acknowledgment of where we meet.  In front of our own waste.  But literal hand-to-hand interaction was new.

So, even though I had already mostly dried my hands on a paper towel, I dried my hands on the paper towel she folded for me.  I guess it worked okay.  But what I said instead was, “Wow!  That really does work!”  I thought this might be suitable enough to get me out and onward, but instead, she blocked the door, looked me right in the eye and said–

“Yeah.  It does work.  And from now on, you will always remember me, every single time you go to dry your hands.”

And then she left.

She wasn’t wrong.  It’s been almost two years, and every time I use more than one paper towel, and I think– Dammit.  I should’ve folded it first.  And I picture her standing there, shaking her head in an I-told-you-so sort of way.  But for the life of me, I can’t ever remember to do it in time to not remember her.

And then there was this–

“This is going to be an amazing night,” David said, showing us where to set up.  He was throwing a party, and generously invited us to be part of it.  We would play six songs he chose from our catalog, and had enough food and drinks and invitations to rest that we were having a pretty cushy evening.  We’ve played plenty of house shows.  We love them, and couldn’t quite see how this one would be any more amazing than the rest.  Except that David kept telling us that it was going to be amazing– the most amazing.  An incredible night.  Unforgettable.

We agreed to play because we like David.  We agreed because he asked us, and is kind.  But unforgettable seemed like a tall order.  Until everyone gathered.  David told his friends and family this was going to be an amazing night.  And then, David told the group about his last year– how he had been through hell and back through medical troubles, severe depression, and even some thoughts that made him believe he didn’t want to stick around long enough to find out if he could love life again.  There, in front of some of his own darkness, he was insisting that we were connected.

“This is an amazing night,” he said.  “It’s not perfect, but it’s incredible.  Unforgettable.”  And it was contagious, this belief.  Suddenly each person seemed to glow with the realization.  It landed.  David spoke it into existence, and it really was amazing.  That each of these people gathered here, that each of them had somehow helped this man, that each of them could see him standing there in front of them because he didn’t give up.  That he knew that he was loved and in turn loved.

If David hadn’t told us all so, we may have missed it.  We may not have realized it at all.

My Someone and I are in the middle of a best friend fight with our best friend.  We are trying hard to keep from saying the sorts of things that would echo years later, while also blocking the door, trying to get him to see us again.

“You won’t forget us,” we seem to be pleading, all the while wondering if he already has.  There is only so much you can fit in before it becomes a hostage situation, and such limited time makes it difficult to recall almost ten years of who we have been while he is simply trying to get out the door.  So we have abrupt phone call endings and erratic texts.

And as much as we all may want to be angry forever, we seem ingrained in the sort of things in each other’s lives that may make it difficult to dry our hands or cook our dinners or drive through certain places without feeling the other person standing there, lurking in an I-told-you-so sort of way.

So I am considering switching my tactic.  Instead of I-told-you-so, I think I will try I-love-you-so.  And maybe also “This is going to be amazing!  Watch this– watch it– see how big our friendship is?  See how much it endures?  See how small we are but how big is love?  Incredible!”

And maybe with a little repetition and reassurance, it will make it so, turning the I-told-you-so into the I-love-you-so.

When we were kids, my best friend Jessica and I would sleep in the lantern light of her mom, Cindy’s, camper, parked in the middle of the Church Camp grounds.  Both of our mothers for that week of Camp would come before bed to brush the knots from our hair and wish us goodnight.  We loved the goodnights but hated the brushing.  We would squeam and squirm and complain at the tug of the brush.  Our mothers would spray in detanglers that smelled like fake apples and too-sweet pears and shush us for any melodrama.

“We don’t want you to do this anymore!” we would say.

“Someday,” Cindy said one night, “you won’t have to.  When we all get to Heaven, there will be no more knots in hair.”

Jessica and I found this to be amazing.  We took turns asking about bee stings and chicken pox and skinned knees, moving further into dead grandparents and pets.  Each of our mothers took turns denying the possibility of any bad thing being allowed in Heaven.  But even above No More Volcanoes Exploding and Melting Villages, there were No More Knots in Hair.

When Cindy passed away this last year after a hard battle with cancer, I imagined her wandering around with the stingerless bees and the volcanoes that spouted vanilla frosting instead of molten lava.  But most of all, I pictured her signature long, glossy blonde hair bouncing as she walked, completely knotless. 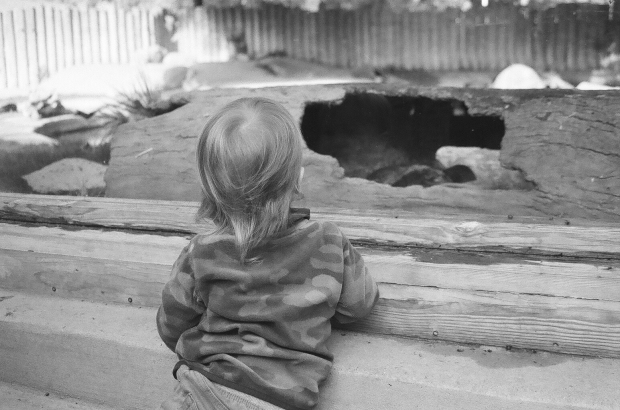 I am wondering if Heaven is a place I have to wait for, anymore.  I am wondering if maybe here, in the dim lantern light in my own camper parked in the middle of a parking lot, is just as good a place to start.  I am wondering about all this hardship, and this belief of God never giving you more than what you can bear.  I am out of the business of blaming God for much, anymore.  Not even at the loss of kind blonde mothers too soon taken.  Which I think may have me out of the business of believing that I have to endure what I am handed at all.

Last week, I cut off all of my hair.  Heaven seemed too far away to wait for knotless hair.  And lately, my nights have been full of goodnight wishes and no brushing at all.