Maybe I should have taken it as an indicator– a subconscious plea to make an exit, a turn around.  What woman meticulously plans to have a wedding dress made under the specifications that she will be able to wear it again after the big day?

I had called on a local artist friend in the Asheville area to weave it: an A-line, heart topped, knee length thing with off-white vintage warp and silver (it sparkled!), orange, yellow, and burgundy weft.  After each fitting, the weaver would describe to me how to wear it after the wedding was over to make it less bells-a-ringing and more dress-up-party-down.  It was possibly the cheapest bill the entire wedding, and simultaneously the most well thought out.

I’ve worn it twice since.  Once to a dinner party to prove to myself that I would wear it again.  A second time for a photo shoot for the band, and as dress up rules apply, doesn’t really count.  All of my I-never-want-to-have-dead-real-estate-in-my-closet-when-someone-else-could-use-it’s are now best intentions, and the dress sits in the same place it does for many women: under an internally lit sign that says, “Not Yet.” 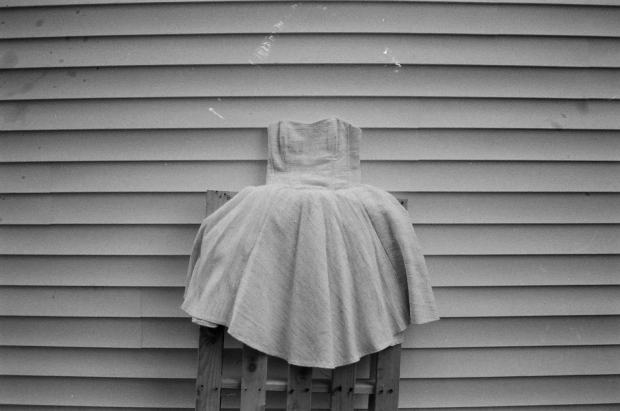 The compulsion is not just with wedding dresses.  Last year when I visited a friend and former college roommate in Louisville and admired her dress collection, she instinctively welcomed me to try them on.  And, of course, I did.  When I reached a particularly sleek, gray-nearing-drab-but-perfect-for-professional-or-winter-day-activities one, I was smitten.  Liz insisted I take it.  But then that thing happened:

“But if you get it home and ever stop wearing it, you have to bring it back.”

I’ve worn it three times in a year, but it weighs heavy in my closet.  Have I done it justice?  Should I keep it to prove that I will wear it enough? Should I return it just to rid myself of the pressure?

Of course, Liz never mentioned the dress again– even when I met up with her in Boston last week.  Likely, it never crossed her mind.  My neuroses is the only one still fixated on the dress.

As I was going through the early stages of divorce almost exactly a year ago, I made a trek to Ohio to find solace in my closest friends– who also happened to have been my bridesmaids.  We spent the days watching zombie movies and The Prime of Miss Jean Brody, eating anything that contained both chocolate and peanut butter, and considering each break in the rain as an invitation to walk the neighborhood.  We talked about what-went-wrong-what-will-I-do-what-about-everything-I-haven’t-thought-of-yet… and the dress.  What will I do with that dress?

A few weeks later, I returned to Ohio, and found that my friend and former professor had done some life purging of her own: she was getting rid of her old dresses.  She used explanations of I’ll-Never-Fit-in-it-Again-Anyway and This-Will-Never-Be-Back-In-Style, but there was a resoluteness about her.  She was parting from a 20 something life she couldn’t return to and choosing, instead, to embrace the life of almost 50.  But not without a fair fight.

She offered the dresses to me, taking care to remove each one from its plastic sheathing, and explaining the importance and value of each one: where she bought it, where she wore it, why she stopped wearing it.  It was a fantastic assembly, as each dress bowed to its previous owner and waited expectantly for me: are you my new mother?  I chose a couple I knew I would wear, some I would alter, and some for the value of her story.  Her first date with her now husband suit was taken, not because I would wear it regularly, but so that someone would care for it the way she had.  She didn’t need the expectation of history staring her down every morning, anymore, but also couldn’t throw the over 20-year-old piece into a pile for Goodwill.  As I packed it up, that thing happened again:

“If you get home, and you decide you don’t want it anymore, I have first right of refusal.  You’ll have to bring it back.” 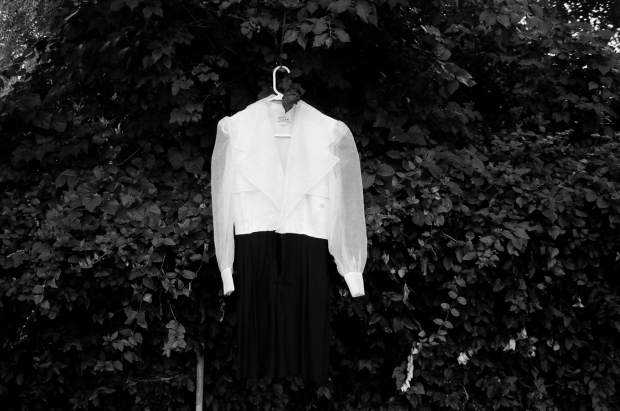 These attachments we make, I’m sure we all realize, are not to the dress itself, but the memory.  The day that changed our lives.  How we looked in that moment.  How much money we spent on it then, and how we still can’t forgive ourselves for it.  The hope that we will feel as happy as we thought we did when we wore it then.  And when we give it up, it’s always with The First Right of Refusal.  Here, you carry this in your closet for a while.  Prove its worth.  Validate that what I believed was true of it still stands.  Then I can let it go.  Maybe this is why mothers hand down their own wedding dresses.  Maybe it’s why some don’t.

As part of my homespun therapy, I spent a couple of months this year photographing five women in my immediate vicinity.  Mostly, I needed a friend– a whole gaggle of them– to pull me out of my embarrassed-to-be-seen-post-divorce hibernation.  Partly, I needed something to keep me busy– something good and present and focused.

I prompted each of the five women to choose a dress– any dress– that they have that they will likely never wear again, but absolutely can’t get rid of.  Then, I asked each of them to wear that dress in their home, and let me photograph them– one roll of color and one roll of black and white– as they perform their run-of-the-mill tasks  What resulted was five interesting and beautiful women with five interesting and beautiful stories that I am delighted to leak onto the internet over the next five weeks.

I gave each of them First Right of Refusal before I shared.  They declined.