This week I have quit smoking for six months.  This leaves me a month and a half shy of the longest I have abstained since I started more than a decade ago.  So, naturally, when I think of my fine accomplishment and my clear lungs and my even clearer head, sans morning grog and congestion, all I want is to start again.

I am learning that this is not because I miss the buzz or the long conversations or how much more brooding and artist-like I look.  I am learning that I want to scrap my good behavior so that I can prove that I am still lovable– against all odds.

“I just learned that I prefer to be by myself,” our host told me in a brief moment I caught her flitting between gardening and paperwork.  “I am so blessed,” she repeated.  This was the phrase she used after describing nearly anything– her well-maintained house, her knack for yard work, her divorces, her troubling tenants in a property a couple hours away, her two cats, her ability to take her own oversized garbage to the dump thanks to her new-to-her truck.  I was having difficulty deciphering if this was her mantra or her belief.

Earlier I listened to her wander around her open wood floored rooms, playing her small guitar and singing about brand new roller skates.  Two marriages later and she had it figured out– it was all for her to be alone.

And then, I wanted her alone-ness.  I know that one woman’s alone was another’s lonely– but hadn’t I had my share of love?  Had I been worshiping Aphrodite all along and am due to turn my head to Athena?  I started planning the tragic end to the love of my life, complete with waitressing and a bungalow in central Maine.  I practiced my lines to my adoring regulars–

Truthfully, I just realized after he was gone, I was really meant to be by myself.  This followed by a knowing smile and sad eyes and a sharp turn in conversation– You needing a warm-up, Eddie?  Charlotte?

I breathe in the North Carolina air.  The hurricane is coming in the next couple of days.  My Someone shuffles in his chair next to me.  I suddenly miss him terribly.  Two feet is too many between us.  I play out our coming years of close quarters and stupid arguments and late night prayers that we go out together and never live in Maine at all.

I am so blessed. 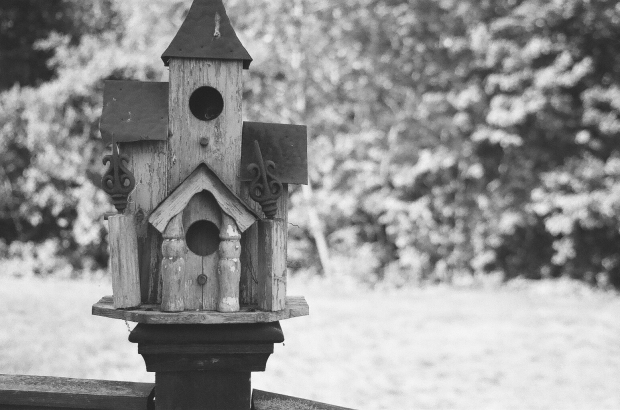 My dog, Butter, is testing her boundaries again.  We like this game, where she follows her sniffs: nose to the ground, both eyes on me.  I whistle once, and I can see the involuntary muscles move in her front legs.  She can hear me.  I walk a few steps further and smile back at her.  She stops sniffing but keeps her nose to the ground, watching.

“Okay, I guess you can just stay here forever,” I call out as I round the bend out of sight.  I hear the jingle of her collar as she looks up.  I begin counting in my head as I slow my pace.

I can feel the vibration in the ground before I feel her whoosh by.  Caught again!

We play this game often enough that I’ve learned to stay in sight on the main trail.  Butter loves the hide and seek.  But when the seeking gets harder, and she believes she is alone, I have watched the panic take her over, darting and panting and whining as she searches the grounds and listens intently until the game becomes no longer a game, and she is plunged into a wild rage of panic.  When she finally spots me those times, she is so relieved she falls to her side and squirms in a way I can only imagine Mary squirmed to see Lazarus again.

Now, I play by her rules.  Nose to the ground, both eyes on her.  We are pushing the boundaries of being lost from each other without ever being lost at all.  Same goes for the Game of Sticks.  I find a stick and woo her in, Butter takes it and crushes it, every time, on repeat.  It’s only sticks, but sometimes in crushing every good thing we are handed by the one we love most, and still more sticks are given, that is how we know we are loved most of all. 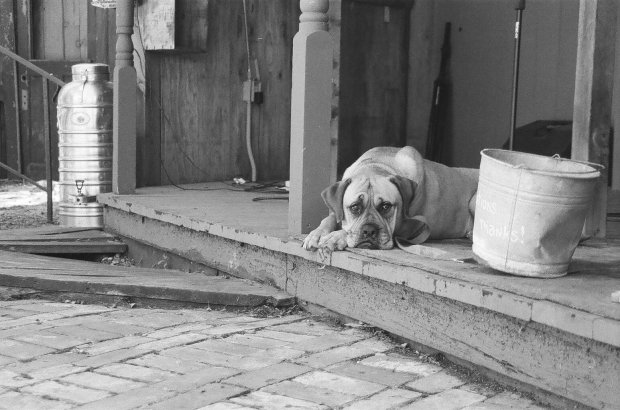 I was hiding again, but I didn’t know it.  I went as far as the property line behind my grandmother’s house, where the cabs from old bulldozers went to their final resting place.  Stacks of odd shaped pipe, manhole covers, and green overgrowth defined the space before the long chainlink fence that separated us from the chemical plant which everyone is now certain is giving the town cancer.  Maybe it was that I decided I had played out our other acres.  Maybe it was another story of a mean older sister.  Likely, I felt alone.  And just like my adult self, now, my 8-year-old self decided that the best way to combat feeling alone is to be completely alone.

Tucked into that old Caterpillar yellow bulldozer cab, I pretended to be driving.  I peeled the paint from the rust.  I pretended to be grown, then I pretended to be small.  I sang any song I could remember.  I made up my own.  I never heard anyone calling.  Just like my adult self, my child self rarely believed anyone needed me.

So when I walked into the house after dusk to a frantic mother and a couple of wide-eyed siblings, I was shocked.  After I was questioned and new telling-people-where-you’re-going rules were set up, I was a little relieved, too.  Sure, I didn’t know I was lost, but it was so good to be found again.

That’s when my brother disappointingly told me his now-ruined plan to put my face on the milk carton.  Me on a milk carton!  It was no Hollywood lights, but this was only from pushing the boundary of love on the property line.

I haven’t lit up a cigarette, yet, and probably won’t.  If I was smoking, I would be trying to quit, anyway.  Just like how when I find myself so comfortable and happy living on the road, my Someone and I start making distant plans to settle down.  It’s all just a test of how different I can become, how far I can roam, and still be loved by the people around me.

And no matter how content or imaginary-content I am to walk far and alone to follow my sniffs, the truth is I am waiting to hear the whistle to call me back in.  I am waiting to see the relief on their faces when I walk in the front door.