“We Vermonters, we value a good Snow Day,” David said.  Sarah was curled next to him, feet tucked under, nodding in agreement as she finished another row of knitting.  The birthday party was winding down, the quiet closing in as a few lingered.  Most were pulling on their boots and trudging through the snow to their cars.  It had been raucous and full of music and people we hardly knew, but the good cheer of a warm house on a cold night was unmistakable.

We are coming to our last couple weeks in our Vermont house.  We’ve been craving winter for years, but always avoiding it as our migratory patterns require us to keep to warmer weather.  But here, as we’ve been house sitting for the month, the snow has been generous in its portion.  But it’s nearly time to push the snow from the top of our camper and put our wheels back on the road.  Our November house has been a real success– woodstove fires and new recipes, and now we’d even hosted a party.  A luxury we haven’t had in our 3 1/2 years living in 16′ of space.  My morning journal pages are full of internal tire squeals as I am pumping hard on the brakes of time, gritting my teeth as the end of our stillness is coming too soon.

“Yeah, when it snows,” David continued, “we don’t try and fight it.  We take the day off.  We go out on a hike or do a project indoors, but we don’t waste it.  Snow Days are a gift– the gift of time.”

It jogs the place in my memory I’m not sure ever happened. 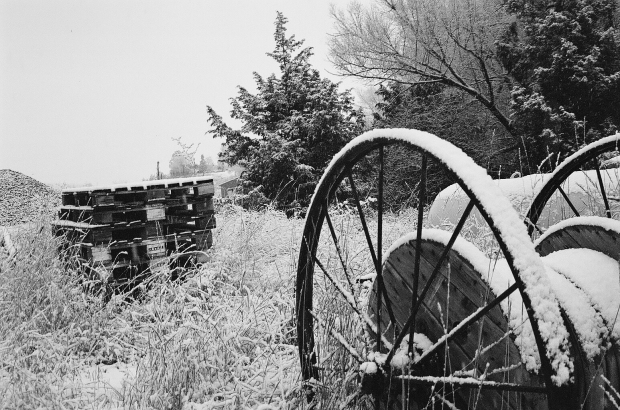 “I’m tired of eating burnt food!” I say, running to the stove and pulling the pans from the burner.  Smoke is filling the kitchen.  Again.  I pour a little water to salvage a breakfast scramble, lowering the heat, slurping my coffee, and pacing back to the running water in the sink.  My Someone cowers a bit.  He was in charge of breakfast today.  I soften.

He agrees, but only as someone who hasn’t seen the pattern.  The scramble is saved.  We eat it quickly.  I linger over a radish.  What’s the point of not burning it, if I’m not taking the time to taste it?

It’s more than a pattern.  It’s an alarm.  I have to slow down.  My morning journal entries continue to fill up that week with smoke alarms beeping to get out of this pattern.

The tempeh bacon burns the rest of the week.  My Someone says it makes it taste like real bacon.  I agree, but I keep hearing the alarm ringing. 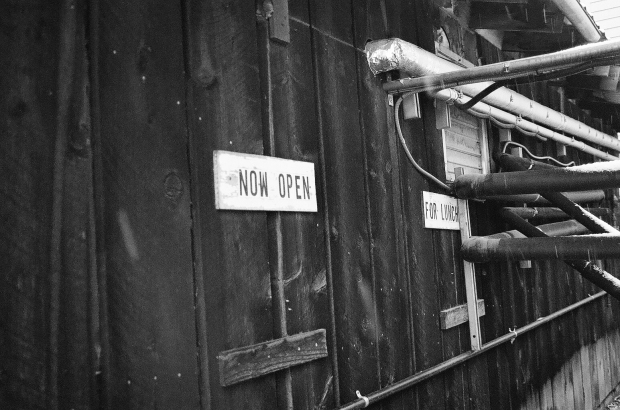 I’m not unfamiliar with snow days.  In fact, the Snow Day could easily be one of my first confirmations that God exists.  As I watched the 5:30PM weather– a routine kept with ritualistic preservation in my childhood house– I prayed that those blocks of cartoon graphic grey clouds would deliver an abominable snowstorm big enough to keep me out of school.  And in the snowbelt of Western PA, it was an easy wish to grant by even the least competent of deities.

It’s the quiet I liked best, and was often the best predictor.  As I hit snooze on my “It’s A Small World” alarm clock and listened, I could often tell before even pulling the curtains back whether a Snow Day had been granted.  It’s the quiet of holding in a breath– the kind of quiet that illuminates the sound of the blood rushing and the heart thumping.  It’s the quiet of my mother pattering downstairs, less flurried than her usual movement of attempting to get four children out the door on time.  It’s the quiet that, as it snowed here in Vermont last week, I could hear it as I slept, and slept deeper before startling awake to the velocity of silence.

Back then, I could value the Snow Day, too.  Even now, the word Snow Day distinctly time travels me to the Blizzard of ’96, where it snowed enough for my father to push feet of it into a small hill.  We built shallow tunnels into the hillside and I contemplated its collapse as I burrowed further than I should.  It takes me to my fluffy snowsuit and sledding down our hill and Cup’o’Noodles that I drank from a mug that had my name inscribed on one side, and a Keebler Elf on the other.

The Snow Day is a gift of time for a kid, too. Sure.  But time isn’t so hard to come by as a kid.  Time is also evidenced in August with blackberry picking and fort building and wandering around the woods of the Allegheny Mountains, waiting on nothing but my mother’s voice or my rumbling stomach to call me in for dinner.

And then I remember this– in the quiet of the Snow Day morning, before I pulled myself out of my 101 Dalmations sheets, there was the unquiet.  The sound of a man– my father– thwarted by the weather.  Again.  Sidewalks to clear.  Driveway to shovel.  Foremen to call.  Plans to change.  Equipment waiting to be hauled to a different job.  Are the roads cleared yet?  Did the salt trucks come through?  Whether it’s the Curse of Adam of the Curse of Technology, grown ups are always finding a way to fight the land, or the skies, or the miracle of the Snow Day. 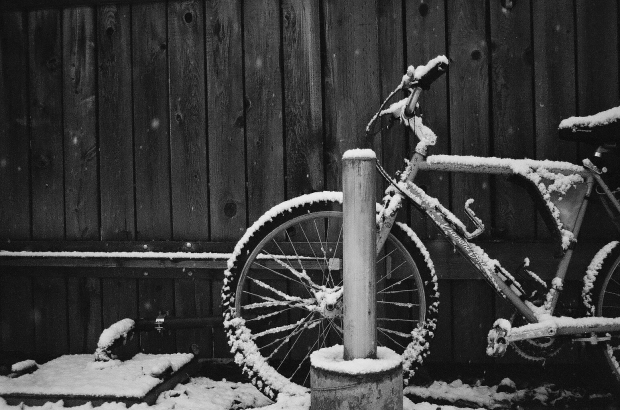 “It’s a gluten free blend, so it crumbles more…” I muttered, “I dunno how it’s gonna end up, but…”

I was fighting with flour, the powder snowing off the counter as I pressed in the shortening with a fork.  That morning, it had snowed.  Vermont typically doesn’t get snow until mid December, they’d all said.  But we had narrowly missed the worst of the storm on our drive back from Boston at 1AM.  We had woken up to a few inches, before the plows made it to our road.  I heard it before we even looked out the window.  We hiked first, our dog rolling and pouncing along the path.  We drank tea.  We ate pancakes.  I burned the tempeh bacon.

I declared it a Snow Day, but we waffled into an afternoon in front of our computers, sending off emails and gathering press kits to send out.  I scolded us for not holding our Snow Day pact, so we read books, then floated back to work again.  We shoveled the driveway and cleared the sidewalks.  By early evening, I had neither worked enough nor played enough.  My Someone went to another room to do some recording.

I stared in the kitchen.  If there was going to be any way to rescue our Snow Day, it would be a pot pie.  Of course.  It would be my first attempt since I had to stop using my mother’s perfect gluten-filled pie crust recipe, more than five years ago.  And I was already impatient, muttering at the dough and scattering the vegetables haphazardly on the counter to assess them.  After chilling the dough I’d made, I pulled it from the fridge, skeptical.  I slapped the first ball on the floured counter and pressed in the rolling pin. I pressed in the cracks forming along the edges, and chastised the dough for not being real flour.  But then the motion of the rolling pin began to soften me.  I was suddenly again 22, living in a small apartment with a smaller kitchen, standing over a lump of dough made from my mother’s recipe.  I was making my first pot pie.  I was cursing the cracks forming at the edge of the dough and watching the clock to make sure I had enough time to get it in oven before my friends came over.  I didn’t.  But when they came, they hovered over my experiment as though I was an expert.  And we talked and I pressed the dough, and with every roll, I felt as though I was pressing into time itself.  This pin, these fickle materials, were grounding me to this place with these people in this time.  Then I delicately placed that time into a shoddy Dollar Store pie tin.  An hour later, I fed that time to my friends, who by that point were two drinks in and couldn’t care less about the caved in top of a chicken pot pie.

I came back to my present time.  I assessed the gluten free dough again.  The dough wasn’t the problem.  I had inexplicable pity for it.  And then for myself.  I stopped making excuses for it.  Carefully, in pieces, I placed the dough into the pie pan, filling in the blatant holes with scraps.  I began to list my present time: potatoes, carrots, celery, peas, corn, parsnips.  I finished whisking the gravy.  I listened to the food.  I didn’t check the time, except to set the timer.  I could hear my Someone tinkering on the piano in the next room.  But somehow, a quiet had settled over the kitchen.  Snow quiet.  The din of my computer screen in the next room didn’t call to me.  Instead, a white wine vinaigrette called to be made instead.  I sliced apples and tossed them over greens with roasted pepitas and almonds.  I felt myself syncing with the countdown of the timer.  Not to beat the clock, but to beat with it.  Not slow motion, but present motion.

My Someone emerged from the next room just as I pulled the pie from the oven.  I waited with actual patience, then sliced at the right moment.  A potato tumbled on to the floor.  One for the pup.  There’s enough for everyone.  It was better than I remembered pot pie tasting.  We had seconds.  It was snowing again.

In Vermont, it seems, I may have figured out how to value a good Snow Day.