“How are you feeling since your surgery?” I asked Michael.

Michael and Gloria are two fans-turning-friends around Atlanta, and have popped in on our concerts nearly every time we’ve been in the area.  Usually energetic, Michael sported a cane, fresh out of knee replacement replacement surgery.  A recall had been issued, and his was one of many unlucky caps that broke shortly after his surgery.  He’s spent the last few years with a bum knee replacement.  Though you’d never guess it.  He’s the first one to the stage after our last song, lugging our gear in the rain at 10 o’clock at night to our truck.

“Even better than it’s been!” he said.  Had he not had his cane, I would’ve forgotten entirely.  He’d already attempted to help me carry an accordion.

“He needs to use it,” Gloria said, “And he’s been doing so well.  He doesn’t even feel it anymore– not like before.  Even when he slept, it was bothering him.”

“Not painful.  Uncomfortable.  He felt pressure.  Was ill at ease.  But we don’t like to use the word pain.  It colors your thoughts, you know?  To know that you are ‘in pain,’ it debilitates you.  Now a bit of pressure, that’s manageable.”

“But we are in a big case now with the manufacturer of his old knee,” she continued, “and the lawyer doesn’t like it.  If we don’t use the word ‘pain,’ we’re never going to get any money out of it.” 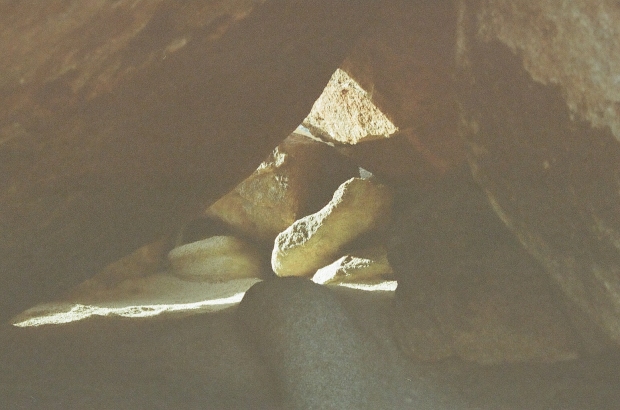 My bad dog is turning good.  And it’s not because she’s stopped barking at people.  Or stopped accidentally nipping the ends of my fingers when she takes a treat.  Or even done anything I’ve asked of her in the last two months since we adopted her.  She’s turning into a good dog because it’s all that I call her, anymore.

We were at the end of our leash when we went to our free 30 minute training at the commercial pet store.  My Someone and I swished back and forth between feeling like martyrs and feeling like idiots, adopting this unruly 100 pound animal.

My Someone listened to me, but he knew better.  This is the way of falling in love for me.  We just needed to figure out how to funnel all of these big bad feelings into loving ones.  And Magpie wasn’t helping.

“Well,” I said to him as we walked in the store, “I guess this is our last chance.”  We met our trainer.  And then I watched as she taught my big dumb animal two important tricks.  It wasn’t the second try that she learned– it was the first.

“You have such a good, smart dog,” she said.

“I have such a good, smart dog,” I repeated.  I felt relieved.  I had done nothing but say no for weeks.  Eight weeks of no, no, no, no, no, no, no.  The sound of yes swung like a broom through my gut, sweeping out the chaotic dust that no had laid down.  I tried again.

The trainer looked at me and my Someone, a surprised smile on her face.  My Someone started crying.

“You have given us a tremendous gift today,” I said slowly.

My Someone and I followed the trainer and my dog happily around the industrially lit store.  Two big dumb animals following helplessly after their patient leaders.

“What are you going to do?” I asked Gloria, “about the case?”

“We aren’t sure, yet,” she said.  “But if we don’t say painful, what does it matter?  What about his quality of life?  Doesn’t that matter?  His sleepless nights?”

I thought of my good dog.  It had been a month since we’d last seen Gloria and Michael.  One month ago, I was restless, too, waking up to a bad dog growing only more bad.  I dreaded them meeting her then.  I dreaded taking her anywhere at all.  I had scolded her before she met Gloria the first time.  “No, Mags, stay down!” I’d said.  She jumped anyway.  I dug my heels in.

This time, I didn’t have that dread.  I wasn’t nervous as we approached them, knowing she would likely bark her head off anyway.   I didn’t feel the dread I’d felt the month before– the pain of judgment I gave myself and my just-learning dog.  Having a bad dog is painful.  Luckily, now I only have a good one.  Which means it’s only occasionally uncomfortable.

“Hello, dogs!” Gloria called through the window.  I winced a little, waiting for her to snarl.  I heard nothing.

“What good dogs you have!” Gloria said back.

I felt the remaining dust of no sweep its way outside of my heart.  We said goodnight to our friends and settled in for a long drive to Florida.

“That was painless,” I said.

“Super easy,” my Someone replied, petting our dog’s head.